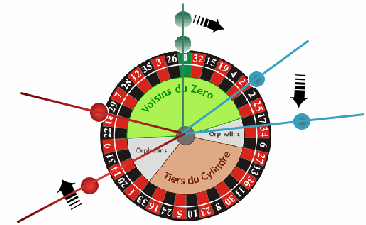 Hello, friends and roulette lovers. With this article, I would like to provide some news from Roulette Place forum and to wish you a happy and prosperous New Year. It’s been a long time since I stopped selling systems, many of you know reasons, and for many, it is not important at all. I ended trading systems, but I did not stop developing.

As the final product comes to my device which people start calling Forest Fib, so let it be FF. The FF consists of 3 fully developed systems for any advanced player needs.E2 is my first system which is explained in details at my forum site. That is a very limited system as most of you already know, E2 requires specific conditions and skills.

Next system is TILT 2, and I will explain it in some more details. Of course, it is designed to take advantage of the tilted wheel. It is an upgrade of the tilt1 system. So what was wrong with TILT1? Nothing was wrong except practicability. Who used it he can understand why. The difference is that TILT2 system does not have all those confusing signals which are hard to follow during the game. Tilt 2 is a self-adjusting system, therefore, does not predict spins where the ball is not going towards the dominant diamond. Only some spins are playable but with higher hit rate, and the system does not require so much of focusing to game as the previous version. IQE6 system is designed for the levelled wheel. It is a state of the art design. Using this system on the levelled wheel is almost as pointing the laser to get 100% accurate ball timing then combine that data with wheel speed data and define the final result. I will explain the process of developing such an accurate device.

The first try was E5, which includes some new great ideas in roulette prediction and I would give credit to solution how to reduce human errors in a change of delay time during ball clocking. It worked fine, but it did not perform so well on different roulette tables even wheel, and the ball was the same kind. Next step was IQE5 which developed in few steps. IQ would stand for the intelligent system, where the system is active and learns wheel specification. The breaking point comes with a solution of analysing ball deceleration time, which constantly changing from wheel to wheel but also during the same spin even within a single rotation. The system received a wider range of usage so that it can play rotor speeds from 2 to 10.5 sec., ½ rotors clocking, and it starts using the calculation for rotor deceleration. Yes, it works fine, so why next step. Simply because it can be better, I am the one who is playing and one who is listening to what the others are saying. New ideas and better solutions coming on weekly bases. Some ideas were not as good as they look at the first moment. A lot of testing at home and in a real environment decides what the best solution is. And that is how I or maybe I better say we, come to a point where we are now. IQE6 most important change is accuracy setting. It comes as feedback and requirement from European players.

If here I can not place very late bets they can, therefore there is no reason why someone wouldn’t benefit from that. Some people simply are so much dedicated to the game that they search the world for the best conditions when they find it they play and when they play they play table limits. Adding those changes was much harder then what I was expecting; it required additional changes in the configuration of ball deceleration so it can cover different deceleration changes and different time frames. Finally, everything is completed. If I read all of this, I would have in mind only one question. So how good it is? It is hard to explain, but I can give you an idea. The system has three levels of accuracy, if I use level 3, then I get the earliest possible prediction, and based on rotor time input and ball detected speed the system from 10 tries seven times produces a result within three numbers of accuracy. The other 3 are around five numbers.