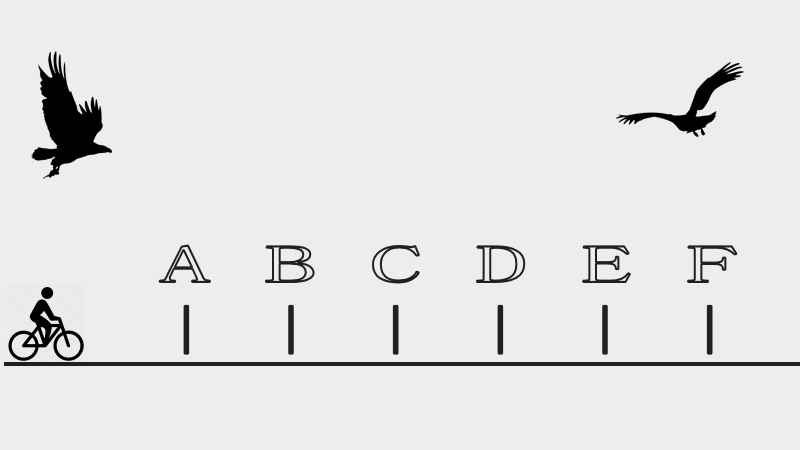 Why roulette wheel is predictable?

For a start, I want you to think about this: 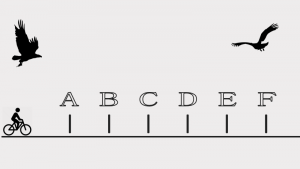 The bike should stop at point E. In such a case, it would be logical to place bets around point E. The same principle applies to the roulette wheel and the ball and its final position. It is more complicated than the pushbike example because here we have two objects that are moving in opposite directions with possible variations in speed.

If we at a particular time take samples of the ball and rotor speeds, those samples can help us to determine the final position by time. When we take time samples, we can relate them to previous measurements.

The ball sometimes bounces in unpredictable ways, but it is not entirely random. Of course, it depends on the roulette wheel type and ball used, but often it takes about 50% of a total of 100% accuracy.

Let’s imagine that you are playing roulette and visually predicting the section of the wheel where the ball will finish. Of course, you can’t be perfect. If you are only accurate about 33% of the time then one-third of the time the ball will stop on one of your eight numbers. What will be your position after playing 30 spins? You will place on the table 30 spins x 8 chips = 240 chips.

Because of your inaccuracy in calculating the correct sector and the fact that the ball may bounce and scatter, you will only hit your played sector 10 times out of 30 spins. So you would win 10 spins x 35 + 10 chips (stake) = 360 chips. So you will be in profit of 120 units, not so bad for about one hour of play.

A decent roulette visual tracking strategy gives an advantage of about 6% over the house. By carefully selecting the croupier, the table, the wheel and the ball I sometimes manage to make a profit of $5000 in one hour. It is achievable because after winning a few spins at the start I increase bet size.

Learn the strategy, and for you, the game will never be just a random win or a game of luck.

Luck is still a significant factor in this game of roulette. After years of playing, I consider myself a reasonably experienced player. Sometimes my results are affected by luck, sometimes good luck occasionally bad luck.

I remember one time I lost, and I was continually predicting the winning sector. The ball would stop one or two numbers on sides of my predicted numbers, or it would stop on a number which I had missed to place the bet. After a while, I made adjustments to my playing sector, but then the ball would hit the other end of my sector and so on.

However, I also remember playing with a new Croupier from the USA. In 20 spins, 18 times the speed of the wheel was consistent, and the ball speed from the start was similar. With similar spins, it was easier to win. Within 60 minutes my money multiplied by a factor of 100. Then the Casino changed the Croupier, I found him later on another table, but when I began to play, he started changing the wheel and ball speed. I struck up a conversation with him, and he told me that he was instructed by the Casino Supervisors to do this.

I am not a gambler so why do I gamble?

It all started 20 years ago in my little hometown in the Communist country of Yugoslavia.

So, the prominent communists opened up a small casino, only two roulette tables, and in my little town, the people were losing money that they were working so hard to earn.

And I was one of those people. At that time I was 20 years old and employed as a telecommunications technical officer and earning $400 – $500 per month.

Occasionally I would go to that little casino with my friends after coming back from nightclubs. We would lose all our money there.

Then once I was on holiday, and in another little casino I met an older man, and he gave me some tips on how to play. ( I will pass that FREE tip on to you shortly.)

After I started using his way of playing I noticed that I was winning $50-$100 every night. That was good money for me as I was only earning was about $400 a month and at that time and place a bottle of brandy cost me $5 or a pack of cigarettes $1.

It lasted for about two months. The Casino was located in the basement of the city’s hotel. That year the water level of the river was so high that underground water flooded into the casino. It was the end of that little casino.

Soon after that, I migrated to Australia where I still live. Here I did not gamble for ten years. I finished more schooling and study and worked for nine years as an Electronics Engineer for a large Telecommunications Company.

Then globalization came. All manufacturing was shifted to Asia. As a result of that, I was given the opportunity to take a redundancy package, quite a large sum of money and the opportunity to start my own business. Starting in business by myself was hard. How do I keep the standard of lifestyle as it was before? We are a family with two kids and a dog.

So the same story again. One night I went to the Casino with my friends. I played the same way as the old man back in the little casino had told me and I won $600, and a few nights later another $1300 then $900. Then I start losing, then winning than losing and so on. I realised that this is not the same as back in that little Casino and I started using my engineering diagnostic skills to figure out what’s going on? What is the difference and what can I do? Of all the games in the Casino, I play only roulette because I could not see how I can have an advantage in the other Casino games but I believed it was possible with this game!

How Did I Play? (Your FREE tip)

The old man told me to look at the reference number under the Croupier’s hand at the point they release the ball. Compare how far from that number on the wheel is to the final number in which the ball stops. After a few measurements, define the angle and always place the bets from the reference number shifted by the same angle.

Example: For easy understanding lets consider the roulette wheel as a circle divided into 12 numbers like a clock. Do not forget that the ball is usually spun once clockwise and the next time counter-clockwise. If the croupier releases the ball clockwise from above the 2 o’clock point and ball stops in the six o’clock pocket, this means there are four hours difference to the right or clockwise. So if next time Croupier spins clockwise releasing the ball from above the six o’clock on the rotor the ball is expected to stop at the ten o’clock position.

For this kind of play to be successful you need to find croupier with consistent spins who has developed a rhythm. But that’s not all. Later on, I realised that the advantage achieved by playing in this way is possible only if the wheel is tilted. That is if the ball speeds up when it runs down one side of the wheel and then slows down as it goes up the other side of the wheel and drops off the track consistently striking the same few diamonds or deflectors above the number ring and pockets.

It is called Dealers Signature you should spend some time reading forum articles:

It took me a while to figure out why I was always winning in the small Casino and only sometimes in this big one. The way I was playing is called taking advantage of a Croupiers signature. The theory is that a ball will be thrown with the same force so it will spin the same number of spins and should stop the same number of pockets away from last spin release point.

In the small Casino, the gambling industry was new, and Croupiers didn’t know about this flaw. They were spinning and spinning consistently. And they never levelled wheels or even checked the level. The Government-owned the Casino, and no one cared.

In the big Casinos, croupiers are trained to notice smart players and how to counteract them. So they deliberately change wheel and ball speeds, and these days most Casinos are checking the level of wheels on daily bases, and they even move the wheels from table to table or rotate the adjustable number ring, so it is not adjacent to the same actual pocket as it was said last week.

My first challenge to win at roulette whenever I played was to study Croupiers. Some are good and some spin too fast and inconsistent. While I study them, they also studied me and began to remember me as the guy who was consistently winning. So they had to change their spinning technique every time I came to play at their wheel. My only option was to wait for a new Croupier and then play fast until they noticed me winning or a Supervisor would come and tell the Croupier to change the intensity and consistency of their ball spin and speed of the wheel.

During that period of play which lasted about three years, I played and improved the old man’s roulette strategy four times. I began to do some calculations and found that very small variations in speed make a big difference for the result.

Number of ball turns around the wheel = 20

Number, the wheel rotates around the centre = 8

Because they are in opposite directions, we can add them. It means that ball will pass this many pockets, 37 x 28 = 1036.

That is a long distance.

If the ball gets just a fraction more power at the start that may result in the ball ending up on the opposite side of the wheel.

My challenge was to find a way to detect that change in speed and calculate necessary adjustments. It took me four years to come to this level, and at that time I improved my way of playing a lot.

There are two main approaches to predict where the ball would stop.

All this is based on my skills on how to use the device and on the data I’ve collected in recent times. As I said, it took me four years of intensive thinking and experimenting to develop a system that is so balanced.

Why the system works as it works would be hard to understand for most ordinary people. The user needs to understand the details to be able to best use it. It’s the same as for a not technical person to understand how only three colours red, green and blue can make so many different colours on a TV screen including white and black. Most people are only happy to use TV.

With supporting documents and a graphical presentation and simulation, it should not be any problem to learn how to best use the device.